When you want to compare several user interfaces in a single study, there are two ways of assigning your test participants to these multiple conditions:

(Note that here we use the word “design” to refer to the design of the experiment, and not to website design.)

For example, if we wanted to compare two car-rental sites A and B by looking at how participants book cars on each site, our study could be designed in two different ways, both perfectly legitimate:

Any type of user research that involves more than a single test condition has to determine whether to be between-subjects or within-subjects. However, the distinction is particularly important for quantitative studies.

Unlike qualitative studies, quantitative usability studies aim to result in findings that are statistically likely to generalize to the whole user population. How the data from such studies is analyzed depends on the way in which the study was designed (that is, on the study’s experimental design).

Often, the main goal of quantitative usability studies is to compare — a site with its competitors, two different iterations of a design, or two different groups of users (such as experts vs. novices).  Like in any scientific experiment in which we want to detect causal relationships, a quantitative study involves two types of variables:

Let’s go back to our original car-rental example. If we wanted to measure which of the two sites, A or B, is better for the task of reserving a car, we could choose Site (with two possible values or levels — A and B) as the independent variable, and the time on task and the accuracy for booking a car could be the dependent variables. The goal of the study would be to see whether the dependent variables (time and accuracy) change when we vary the site or they stay the same. (If they stay the same, then none of the sites is better than the other.) 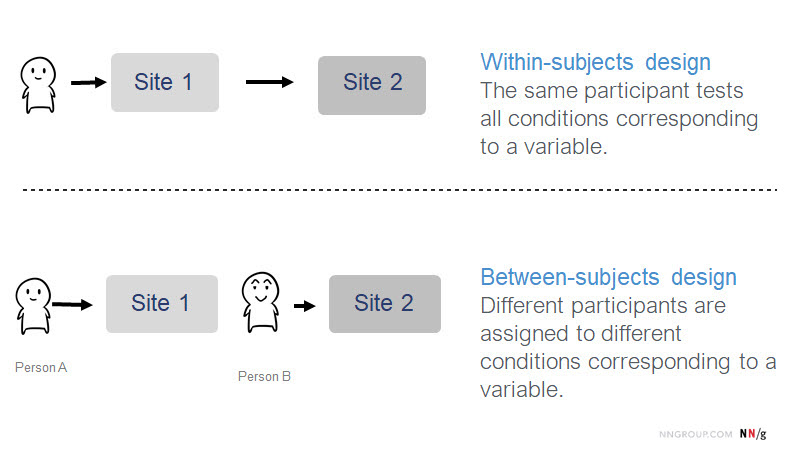 It is possible that an experiment design is both within-subjects and between-subjects. For example, assume that, in the case of our car-rental study, we were also interested in knowing how participants younger than 30 perform compared with older participants. In this case we would have two independent variables:

For the study, we will recruit an equal number of participants in each age group. Let’s assume that we decide that each participant, whether under or over 30, will make a car-rental reservation on both site A and on site B. In this case, the study is within-subjects with respect to the independent variable Site (because each person sees both levels of this variable — that is, both site A and site B). However, the study is between-subjects with respect to Age: one person can only be in a single age group (either under or over 30, not both). (Well, technically, you could pick a group of under-30-year olds and wait until they turn 30 to have them test the sites again, but this setup is highly impractical for most real-world situations.)

Some independent variables may impose the choice of design. Age is one of them, as seen above. Others are Expertise (if we want to compare experts and novices), User Type (if we want to compare different user groups or personas — for example, business traveler vs. leisure traveler), or Gender (assuming that a person cannot be of several genders at the same time). Outside usability, drug trials are one common case of between-subject design: participants are exposed to only one treatment: either the drug being tested or a placebo, not both. And sometimes the manipulation itself changes the state of the participant: for example, if you want to see which of two curricula is more effective for teaching reading, you could not have the same student be exposed to both, because once she’s learned how to read, she cannot unlearn it.

Which Is Better: Between-Subjects or Within-Subjects?

Unfortunately, there is no easy answer to this question. As seen above, sometimes your independent variables will dictate the experimental design. But in many situations, both designs may be possible.

Randomization: Essential for Both Types of Design

Whether your experimental design is within-subjects or between-subjects, you will have to be concerned with randomization, although in slightly different ways.

Above, we discussed why randomization is important in within-subject designs: it counteracts the possible order effects and minimizes transfer and learning across conditions.

For between-subject designs, you must make sure that participants are allotted randomly to conditions, because you want to ensure that your participant assignment does not affect your study results. Thus, if a researcher decides that all the participants that he likes should interact with site A and then he finds that site A performed better than site B, he won’t know whether he’s discovered a true difference between the sites or whether the result simply reflects his assignment (for example, because people who sense that they are liked tend to return the favor, and may be more patient or have a positive mindset during the test).

Even without such an obvious bias as your personal preferences, it’s easy to get randomization wrong. Say that you run a study across four days, Saturday through Tuesday. You might decide to have the first half of the test users start with site A and have the second half of the users start with site B. However, this is not a true randomization, because it’s very likely that certain types of people are more likely to agree to a study during the weekend and other types of people are more likely to sign up for your weekday testing slots.

User research can be between-subjects or within-subjects (or both), depending on whether each participant is exposed to only one condition or to all conditions that are varied within a study. Each of these types of experimental design has its own advantages and disadvantages; within-subjects design requires fewer participants and increases the chance of discovering a true difference among your conditions; between-subjects designs minimize the learning effects across conditions, lead to shorter sessions, and may be easier to set up and analyze.

Raluca Budiu is Director of Research at Nielsen Norman Group, where she consults for clients from a variety of industries and presents tutorials on mobile usability, designing interfaces for multiple devices, quantitative usability methods, cognitive psychology for designers, and principles of human-computer interaction. She also serves as editor for the articles published on NNgroup.com. Raluca coauthored the NN/g reports on tablet usability, mobile usability, iPad usability, and the usability of children's websites, as well as the book Mobile Usability. She holds a Ph.D. from Carnegie Mellon University.

The latest articles about interface usability, website design, and UX research from the Nielsen Norman Group.

Subscribe to the weekly newsletter to get notified about future articles.